Robotics is a very fast growing industry and with the availability of low-cost motors, actuators, computers and open-source software libraries, it’s easier than ever for hobbyists to design and build their own robots. By robots, I don’t just mean humanoids or robotic arms. The word “robot” stems from the Crezh word “robotnik” and Slavonic word “rabota”, both which mean “slave”. This is overly generalized, so for the purposes of this series of articles, we’re going to stick to any actuated set of joints designed to do specific tasks. This includes robotic manipulators used in assembly lines and the ISS, mobile robots and drones.

Lots of desktop robotic manipulators are also popping up such as the DOBOT Magician and the 7Bot. Many of these come with open-source software development kits (SDKs) and libraries to program the controller for custom applications. Generally if users would like to develop their own controller, they would need to be a robotics engineer or have extensive knowledge of robot forward and inverse kinematics, dynamics, control systems design and parameter identification. What I’m attempting to do is teach some basic robotics math — sufficient to develop your own robots or controller. In order to do either of those, it’s critical to understand the dynamics of the robot — that is, how the robot responds to certain inputs that cause it to be in motion. The dynamic equations of motion of a system address this. They are a set of equations that allow you to calculate the next state of the robot in a dynamic setting, given the current state and some input. This article specifically goes over how you can derive the equations of motion of a robot.

Prerequisites: Yes, there is definitely prior knowledge you must have before we dive into this! This article is ideal for those with a Bachelor’s degree in an engineering, physics or mathematics field. I’ve also provided links to good courses or materials on these topics if you’re missing something. You need to understand linear algebra, coordinate frames, and basic Calculus. It is also very helpful to understand Kinematics of robotic systems — specifically the forward and inverse kinematics, before you dig into dynamics.

If you’re reading this, you probably either want to design a robot or you have a robot and want to develop a simulator or controller for it. Robotics programs at most Universities use MATLAB to derive the equations of motion of a robot. However, MATLAB is not free so we’ll use Python 3 — a great, free programming language with a ton of libraries and toolkits. In this article, we’ll use Python to derive the closed form dynamic equations of motion of a simple three-link robotic manipulator. If you’re interested in modeling a mobile robot or a drone, this is still very important in order to understand the process and the core equations behind the dynamics. I can also write another article in the future that shows an example of modeling another kind of robot. Once we derive the equations of motion, we’re going to develop a simple simulator for it which will allow us to develop and test controllers. In this example, we’ll consider an Anthropomorphic Arm without a wrist to keep it simple. 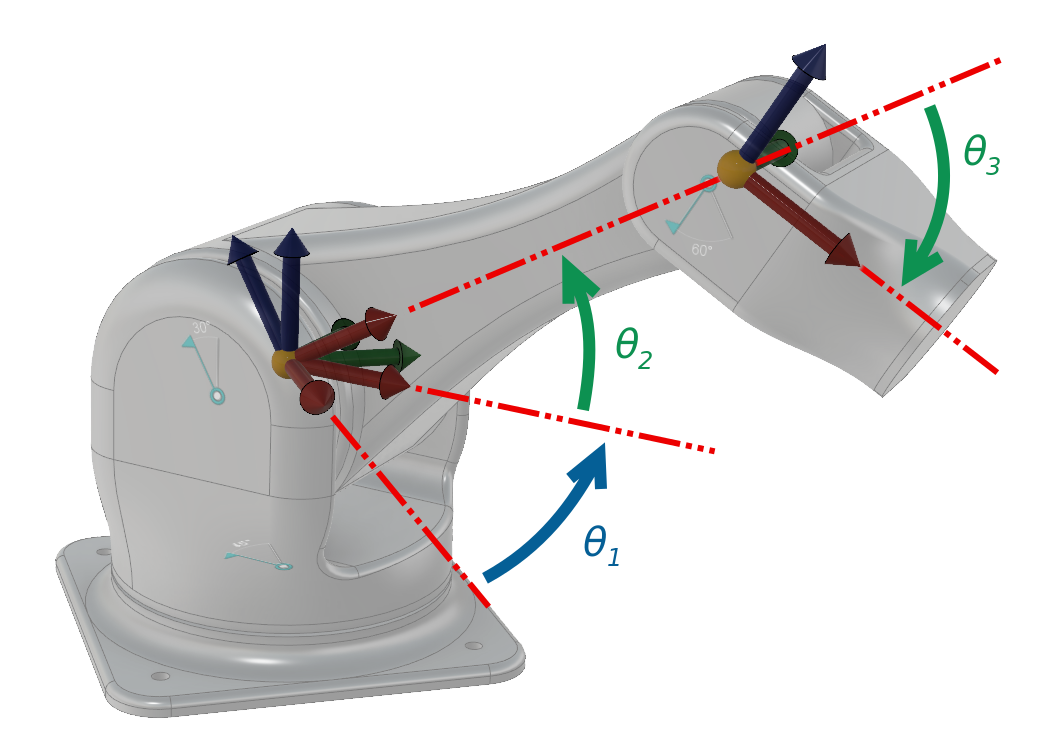 You need the sympy library to process symbolic math in Python. You can install it using the terminal command:

I describe the important equations in deriving the dynamical model of a robotic system in this paper on designing an omnidirectional controller for a spherical robot. I’ll be referencing equations from the paper in this article. More papers can be found on the Research page of our website that describe dynamical modeling for control systems design.

We start with defining the generalized coordinates of the system. In order to do this, we need to place coordinate frames at each joint. Generally, there are conventions such as the Denavit-Hartenberg convention for where to place coordinate frames but we’re going to keep it simple to minimize the number of variables. We’ll place the origins of the robot’s base frame, first frame and the second frame at the same point — at the intersection of the robot’s first and second joint axes. This way, the translations between these joints are zero vectors. To get from the robot’s base frame (fixed) to the first frame, we’ll rotate about the z-axis (blue) by angle θ₁. We then rotate about the y-axis (green) by angle θ₂ to get to the second frame. Finally, we offset the third frame by the length of the second link about the x-axis (red) of the second frame and rotate about the y-axis by angle θ₃ to get to the third frame. If we have an end-effector, we can add that in as well however for now, this should be sufficient to get a rough dynamical model.

Similarly, we set up the dynamic parameters for the remaining frames. rotx, roty and rotz are three-dimensional rotation matrices in each of the orthogonal axes.

We use what’s known as the Euler-Lagrange formulation to derive the equations of motion for the system. The formulation is equation (3) from the paper (referenced above). The equation relates the Lagrangian of the system to the generalized coordinates and the forces and torques about these generalized coordinates. The Langragian of the system is the total kinetic energy minus the total potential energy of the system. We’re going to compute the kinetic and potential energies for each link and use them to get the equations of motion.

Equation (4) from the paper describes the computation of the kinetic energy of a given body. We can write a python function to compute the kinetic energy given the mass, velocity, rotation rate, center of mass and inertia tensor as follows:

Equation (6) from the paper describes the computation of the potential energy of a given body. The python function for that is as follows:

We need to compute the kinetic and potential energies for each frame with respect to a universal inertial frame. We use the base frame as an inertial frame for most scenarios to keep things a little easier. The next step is to transform each frame to the inertial (or in this case, base) frame to compute the kinetic and potential energies. Below is a snippet of code for the three frames in this robotic system:

The Euler-Lagrange formulation can be re-written in the form of equation (7) from the paper. This is done to be able to isolate the generalized accelerations vector. The goal is to solve the system for the generalized accelerations and integrate the accelerations to get the velocities and coordinates for the next time step. In the paper, we have a Pfaffian constraint that is applied which isn’t necessary for this simple example. We can therefore ignore the A and λ terms. We need to compute the H matrix — which represents the system mass matrix, the d vector — which represents the Coriolis and centripetal forces on the links and the g vector — which represents the Gravitational forces on the links.

From the kinetic and potential energy functions, we can extract H, d and g using the following equations:

And there it is!! We now have the equations of motion of a robotic system! The next step is to prepare it in the correct format for integration. We’ll use a program called Dynamix to integrate and simulate the system. Dynamix is a program I developed for my Master’s Thesis (in Space Robotics! Check out my work on our research page). We’re going to be providing a free license of Dynamix for research and non-commercial use very shortly. Dynamix uses either the Newton-Euler recursive algorithm for numerical integration or allows users to provide custom equations of motion in a C++ file. So, in order to use the equations of motion, we need to export it to C/C++ code. We’re going to use Sympy’s codegen utilities for that. The following snippet of code achieves that:

In the next article of this series, we’ll discuss how to use these with Dynamix to setup and simulate the robot.

These equations of motion allow you to control the inputs to the joints as torques at each joint. However, you probably care more about voltages applied to motors at these joints. In order to do this, we need to develop electrical dynamic equations of the actuators. We can combine those equations with H, d and g derived in this article to develop the combined electro-mechanical equations for the system and use voltages to drive the actuators. We will be going over that in this series as well!