In the United States, airspace is classified using the International Civil Aviation Organization (ICAO) classes A through G, with the exception of class F. Airspace classification is implemented in order to maximize pilot flexibility while minimizing risk of collision. Airspace classification provides separation and active control in high density air traffic regions such as high speed airways and near major airports. In order to provide quality air traffic control services, commercial and military aircraft are tracked in the airspace.

Primary radar, originally developed for military use is a basic form of air traffic surveillance that uses a conventional radar sensor to transmit an electromagnetic wave and measure the time to receive a signal reflected by the target. Using this time, the distance to the target can be estimated. The direction of the radar antenna along with the distance can be used to estimate the position of the target. In the modern age, primary radar is only used as a backup.

Secondary radar, which came to be known as Secondary Surveillance Radar (SSR) for civil use is the preferred air traffic radar used for commercial operations. Secondary radar uses a radar beacon system that relies on “transponders” on aircraft to transmit their position, altitude, call sign, squawk code etc. TCAS, Mode S and ADS-B are modern methods for secondary radar.

ADS-B: See and Be Seen

Automatic Dependent Surveillance — Broadcast (ADS-B) is a technology that determines the aircraft position using satellite-based GPS and periodically broadcasts it. “ADS-B Out” broadcast packets are picked up by other aircraft equipped with “ADS-B In” and ADS-B receivers on the ground and track the position of the transmitting aircraft. ADS-B on its own is sufficient to replace primary radar. 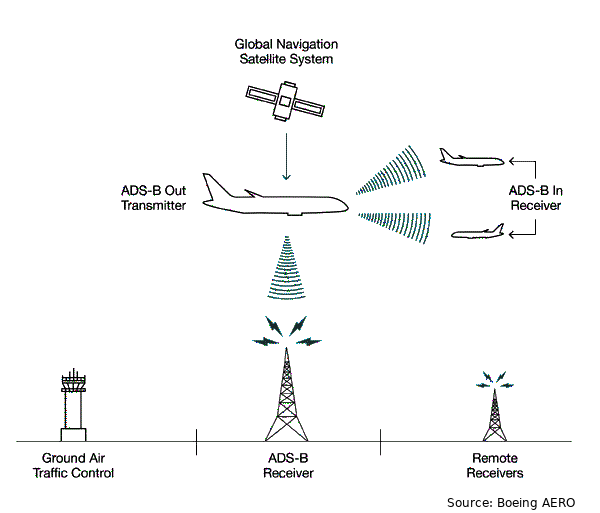 In order to be track and be tracked using ADS-B, aircraft are required to be equipped with transponders. Many avionics companies including Stratus and Garmin provide ADS-B transponders for general aviation aircraft for between $1,500 and $4,000 USD.

With the fast growing drone industry and with companies realizing the potential of unmanned aircraft, it’s more important than ever to ensure safe integration into commercial airspace. Currently, the Federal Aviation Administration (FAA) limits drones to fly under 400 feet above ground and in uncontrolled airspace only. In pilots need to operate drones within 5 miles of an airport, they are required to contact the airport Air Traffic Control (ATC) tower and request permission.

Most drones are operated remotely or at least with a wireless telemetry down-link to the base station. Drone pilots are also required to maintain a visual on their aircraft. This limits operation to Visual Line Of Sight (V-LOS). If drones were to fly beyond V-LOS, the telemetry link would provide the drone’s position, altitude and speed to the ground station. This is currently, still limited to the operator and other pilots — of both manned and unmanned aircraft would have no precise method to track these drones. This is very unsafe, and a lot of reports have come up in recent days about near collisions between drones and commercial manned aircraft. 1.2 million drones were sold in the US in 2016, and around 1,800 drone sightings were reported by manned aircraft pilots the same year. This is a 25% increase from 2015. A Boeing 737 or Airbus A320 on approach at around 160 knots has less than 8 seconds to respond to the drone. The FAA Advisory Circular 90–48D has shown research that an average pilot requires a total response time of 12.5 seconds to see an obstacle, recognize it, become aware of the collision course and make the necessary turn. Hence, it’s very dangerous to allow drones to fly in commercial airspace without being tracked.

The FAA, along a few companies are exploring the possibility for drones to be tracked via ADS-B just like manned aircraft. This would allow drones to be tracked by other aircraft and proper traffic avoidance procedures can be followed well in advance. The ability to track drones and allow for beyond V-LOS flight is a significant step for the unmanned aircraft industry. Drones can be used for delivery, medical transportation, surveillance, inspections, agriculture and many more applications if they can safely be integrated into commercial airspace.

DIY drone enthusiasts have managed to “hack” 1090 MHz TV receivers and have used them to receive ADS-B packets from aircraft nearby. uAvionix has also launched the pingRX which is a low-power ADS-B In receiver to track other aircraft. Using these ADS-B In receivers, drones can keep track of the positions of commercial aircraft and maintain safe separation. Recently, low power and light weight ADS-B transceivers (both In and Out) have also been introduced. Generally, commercial manned aircraft transponders transmit at up to 350W. The ADS-B transceivers designed for drones are designed to transmit up to 20W nominally. This significantly limits the distance at which other aircraft, ATCs and ADS-B receivers can track the drones. And even then, 20W is a lot of power for small drones! Many small drones fly with under 100W of power to its motors and an additional 20% power requirement can significantly affect its endurance.

At Aptus, we’re working on a potential solution for the problem — we want to drop the transmission power of the on-board transceiver even further, to under 1W and increase the tracking range close to that of commercial ADS-B transponders.

The Largest Wireless Network right in your Pocket

We’re asked to turn off our phones when flying commercially, but most of us forget or don’t bother. We’re usually reminded when we get a notification or text message at up to 6000 feet. Some passengers have reported 4G LTE coverage even at 16,000 feet above ground! The US, and now many other countries as well have a very large mobile network infrastructure. Below is a coverage map for 4G by Google’s Project Fi. 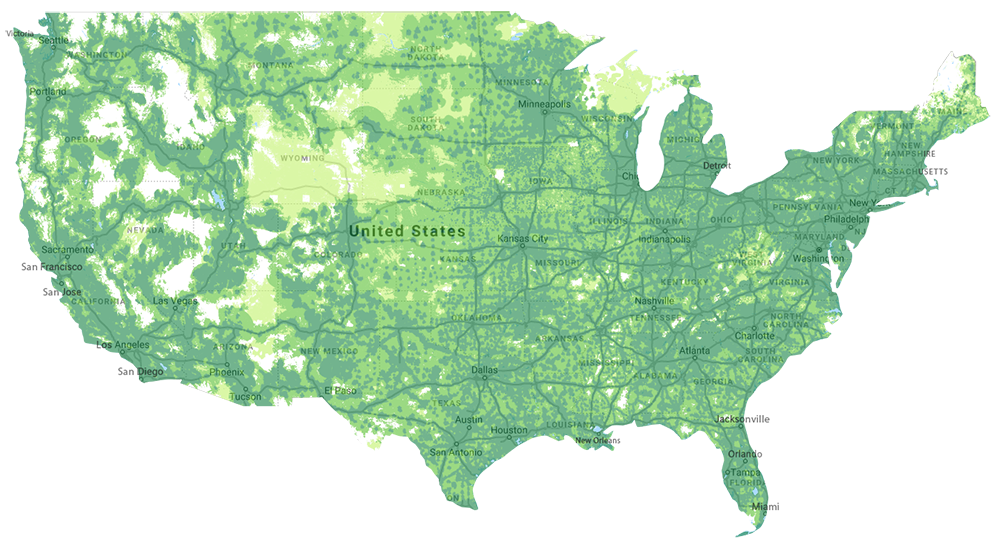 Furthermore, the development of the ultra low-power embedded LTE-M network has allowed for developments of much cheaper and lower power mobile network access devices. Drones are currently limited to fly only up to 400 feet, but most operations would be most efficient between 1000 and 5000 feet above the ground. Well, if we can connect to the internet through 4G LTE at these altitudes, drones should be able to broadcast their position to a centralized online database with LTE-M modems. This still doesn’t solve the problem of other pilots and ATCs seeing the drones. Setting up internet-connected systems on every aircraft flying in the US is a very expensive, time consuming and tedious task and the FAA would most likely not approve that.

One of the unique features of ADS-B is that the actual source location of the ADS-B transmitter does not affect where other aircraft and ATC sees the transmitting aircraft. The aircraft position is determined only by the GPS position transmitted as part of the ADS-B packet. If there were high power ADS-B transmitters spread across the country that just polled the database of drone positions and relayed them as ADS-B packets around the actual position of the aircraft from the database, ADS-B receivers and ATC towers would be able to pick up the drones. The database would also consist of positions transmitted by other manned aircraft with ADS-B. This can be queried from sources such as FlightRadar24 and FlightAware. This could potentially solve every aspect of the problem!

In order for this to work, we would need to set up the centralized database for drones to log their positions to. Hardware would need to be developed that allows drones to connect to the internet, specifically the database using LTE-M. Additionally to ease integration, traffic and collision avoidance procedures would have to be mandatory for flight controllers that are to be used with this system. The most difficult portion of the project would be setting up an array of ground ADS-B Out transmitters to relay the positions of unmanned aircraft from the database. This would however be much easier and cheaper than getting all other aircraft to connect directly to the database.

My team is working on an implementation plan for the system. We’re trying to get in touch with the right people with the connections to make this a reality and push for safe integration of drones into commercial airspace. We’re actively looking for partners to work on this project. Please contact us if you’re interested in collaborating.